This comparison shows that behind all programs – xianity, communism, islam, Marxism, etc. – stands the same kike mentality. As Russians used mongoloid battalions for rapes and atrocities, so English and Americans used Moroccans as hordes of beasts that raped everybody on their way. This is mutual tactics of all the Allies, because behind all of them were kikes:

“Soldiers and officers raped women. Two main hospitals of Berlin only received from 95 to 130 thousands raped. About 10 thousand raped committed suicide. In the Eastern Prussia Pomerania and Silesia 1,4 million women were raped, and in this case there were more deaths. As a whole not less than 2 million German women were raped. Ukrainian, Russian and Belarusian women and girls freed from German labor camps were also raped”.

“Let me tell you about one group of victims — real victims — from the Second World War that you’ve never heard about for this very reason. In May 1944 the Allies — the forces of democracy and equality, the anti-Nazi and pro-Jewish forces — finally succeeded in taking Monte Cassino in the Apennines of central Italy away from the German Army, after bombing Monte Cassino’s sixth-century abbey into ruins. The Allies had some Moroccan soldiers with them. They wanted “diversity” in their armed forces even then. They wanted to demonstrate their belief in racial equality. The Moroccans were only mediocre as fighters, but they really excelled at cutting the throats of prisoners after the fighting was over. They were pretty good at raping civilians too. The night after the battle for Monte Cassino was over and the Germans had withdrawn in good order, a division of Moroccan soldiers — 12,000 of them — left their camp and swarmed over a group of mountain villages around Monte Cassino. They raped every village woman and girl they could get their hands on, an estimated 3,000 women, ranging in age from 11 years to 86. They murdered 800 village men who tried to protect their women. They abused some of the women so badly that more than 100 of them died”.

“This is atrocious right here. Shows the pure hatred of the enemy bastards, their sick mentality, their sick religion and the Jewish and Muslim hatred for all that is beautiful and is of Satan. The Swedes are of the most clear blooded whites, and they get assaulted into this Marxist cultural brew.

I remember a mention by Savitri Devi, about those naturally lower, attacking their superiors, just because of pure jealousy and hatred.” – High Priest Hooded Cobra 666

In the picture, Linda, a Swedish raped by a gang of Islamic Africans: 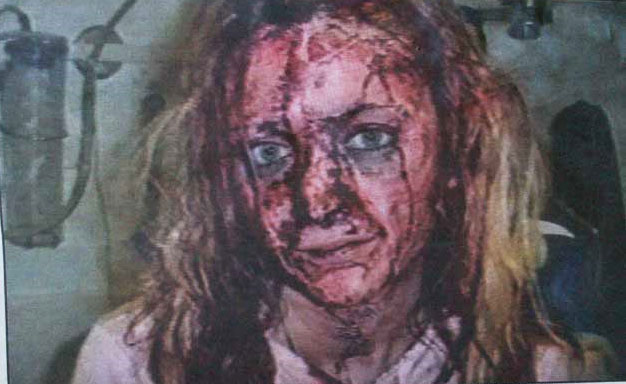 Sweden has imported huge numbers of Muslim immigrants with catastrophic effect.
Sweden’s population grew from 9 million to 9.5 million in the years 2004-2012, mainly due to immigration from “countries like Afghanistan, Iraq and Somalia”. 16 percent of all newborns have mothers born in non-Western countries. Employment rate among immigrants: 54 percent.
Sweden now has the second highest number of rapes in the world, after South Africa, which at 53.2 per 100,000 is six times higher than the United States. Statistics now suggest that 1 out of every 4 Swedish women will be raped.

In 2003, Sweden’s rape statistics were higher than average at 9.24, but in 2005 they shot up to 36.8 and by 2008 were up to 53.2. Now they are almost certainly even higher as Muslim immigrants continue forming a larger percentage of the population.

The statistics are skewed by urban centers where the Islamic colonists cluster. In Stockholm this summer there was an average of 5 rapes a day. Stockholm has gone from a Swedish city to a city that is one-third immigrant and is between a fifth and a quarter Muslim.

Sweden, like the rest of the West, will have to come to terms with the fact that it can either have female equality or Muslim immigration. It cannot have both”.

“This deep seated hatred for and fear of Aryans is so typical of the jewish soul, and islam as we know is jewish to its very core.

Umar Ibn Al Khattab, after slaughtering thousands of the Aireyanem/Aryan Pagan People, sold their women as sex slaves in the islamic capital of Medina. This shows the extent of his sadistic and sick hatred of the Aryan Pagans.

The modern day Yezidi People of Iraq are distant descendants of these Airyanem Vaejah, illustrated in the fact that many of these men and women still exhibit the Aryan physical features such as blond hair and blue eyes:

Still today, Umar Ibns hatred of our Aryan Gentile People, or should I say the jewish hatred of our People, lives on as we can see in the islamic genocide of these Yazidi’s currently taking place today.
http://www.dailymail.co.uk/news/article … aq-UN.html

Note how they use rape and impregnation as a means of destruction. They are trying to eradicate the Aryan genes from Humanity altogether. They used the same tactics during the islamic conquests. Many of the women of the conquered lands who were not slaughtered were taken as sex slaves, impregnated and their genes destroyed. The jews often use this tactic to infiltrate, as I spoke about in more detail in my sermon about the true origins of islam. It is also why they encourage and push race mixing upon Gentile Humanity. This is systematic genocide!”

– from The Islamic Conquest – the Bloodiest Chapter in Human History

“Don’t be shy to use violence and break the racial pride of German women. Take them as your legit property, you, gallant soldiers of the Red Army”.
– Ilia Ehrenburg, Russian Jew, holohoax propagandist

Aboda Sarah 37a: “Daughters of goyim from 3 years of age can be raped”.
– Talmud

“You can’t take married woman till you won her in battle with the unfaithful”
– Koran 4:24

Back to Death of communism

Back to White Death of islam