This is disgusting. And more disgusting is that people in Russia watching REN-TV eat all this lie and accept such laws. Their “opinions” are made for them, than they go and accept all horseshit they are given as “law”. I already wrote how we were force fed the law that we MUST BE MICROCHIPPED TILL 2025 “for our own security”. And a lot of people trust in this “security”.

Right now from all textbooks in schools they are taking away next year – what do you think? – Tatar-Mongol yoke. While there are plenty of genetic proof all around the net that we DO have mongolian yellow blood, our race IS polutted, our blood is NOT White anymore. While there is a lot of proof that a lot of our bloodlines came out of one male in 13 century. People in Russia do not use the net, they watch TV and trust it, because internet is “smth too new and modern”, “difficult to use”, “demands learning” etc. What jews do, they just put on TV what they wants (in those 2-3 channels that people usually watch in their distant villages), this is how jews get masses on their side.

Returning to the issue with Yellow yoke. They impose on us, that:

1. Genguis Khan was “yet another one of our own Russian princes”, just because “he was White”.

2. It is we who are to blame for conquering the world (since Genghis was Russian). Pour little yellows, they were never genociding anyone, White Russians were.

3. We and Genghis are the same so its ok to mix, we are same race, which is the subconscious message not only of race mixing but to creating new Soviet Jewnion on the place of the old one, so that all races of these territories mixed. We must unit with yellows in one “human race” – that’s why all this lie was invented.

How do you think who is behind the project and who is the one going to sign it for the so called “Russian hostorical society”?? I will not tell, I will wait you read yourself below.

“Western” Propaganda? Exaggeration? You think “oh, how Russia can be so medieval? they have internet, they have civilization, they have Soviet Jewnion dead, they have Nazi pro-White Putin, what’s their problem?” – really??? I will show you news proving every single word above – EVERY. From all our official sources, official governmental channels, such as NTV. But before I do it…

Translation of the title: “Internet came to Norilsk. This event Norilsk celebrated with a great holiday and light shows” – news dated 09/23/2017

“In the access zone: in 2018 the Internet will appear in 56 settlements of the region

Note all these is in future sense, in 11/2017 people still lived WITHOUT internet.

“Prison for “god does not exist”

Some kind of fantastic story. Someone Viktor Krasnov from Stavropol in his comments in the social network wrote to his opponents that there is no God, and the Bible is a collection of Jewish tales. He was applied to the police. After that he was forcibly put in a psychiatric hospital for a month, and then cops from the “E” department began to press him for extremism – they called for genetic material* (!), Asked the employer to fire his mother from work. As a result, he now accused of an article about insulting the feelings of believers, will be a court, he faces a year in prison. Something quite incredible, does not fit into my head.”

“If smb says “Russia is for Russians” well, he is either a goofball, or a provocator”.

Enough said? NO, entitled nations do not think so. Here are the news…

From the new history textbook, the Tatar-Mongol yoke will disappear

On the website of the Russian Historical Society, a document appeared that could seriously change the teaching of history in schools. The draft of a single textbook of history, for all its political correctness, caused a storm of politically incorrect emotions.

The so-called historical and cultural standard has been put on public display, on the basis of which they will write a new unified [single] textbook of the history of the country. According to the plan, he should talk about the most significant events – from ancient Rus to our days.

They propose to forget about the Tatar-Mongolian yoke. In the new unified history textbook, most likely, there will not be such a term. Instead, it will appear a longer one – “the system of dependence of the Russian lands on the Horde khans.” From the usual “Tatar-Mongol yoke” strongly suggested to abandon the historians of Tatarstan, and they meet halfway. Long debated how to call the events of 1917. We came to the term “Great Russian Revolution”.

In the paragraphs on the thirties of the twentieth century another new school term will appear: “Stalinist socialism.” While they decided to explain it this way: industrialization and modernization, carried out by extraordinary methods.

They also criticize the way how we put Yeltsin period. Now we will be able to see only “shock therapy” in our textbooks. Other reforms of the 90’s will be not mentioned in the concept. Of the current acting politicians they will mention only Gennady Zyuganov and Vladimir Zhirinovsky. There is nothing about protests in December 2011, and Putin’s third term is described as just a return to the presidency, that confirmed the continuity of power. By the way, the president himself will have to sign the final version of the concept and a single textbook of history.

NTV correspondent Vladimir Kobyakov listened to different opinions on the new teaching of history and found out: in the community of historians, not everyone approves the attempts to impose new single textbook.

In the new textbooks on history, there is now no “Tatar-Mongol yoke” and “Stalinism”

In this school year, the schoolchildren are waiting for a different story. The subject will be studied according to new textbooks that have passed a special examination of domestic and foreign historians. All this within the framework of the new program – the 5th grades pass to the federal state educational standard. The first thing was the story. Something has changed in it.

A single concept of studying history is now in the binding. New textbooks on the national course were purchased in most schools. For two years 11 applicants tried to get into the federal list of publications, but the Russian Historical Society approved only 3 lines of textbooks from the 6th to the 10th grade. On their covers – a note on the passage of expertise of the historical and cultural standard.

Natalia Trapeznikova, teacher of history: “It is the historical and cultural standard that will now become the basis, as the authors of this document promise us, to compile a database of assignments for passing the final certification, examinations in 9 and 11 classes. That is, this is for us a landmark.”

The canonical textbook should contain different opinions on historical events and at the same time avoid unacceptable interpretations. This task was put by the president. As a result, the controversial episodes of Russian history were attempted to reduce to a common denominator.

For example, the term “Mongol-Tatar yoke” in new textbooks was replaced by the wording “Dependence of Russian lands on the Horde”. The manuals no longer include the February and October revolutions of 1917. And there is one – the Great Russian Revolution. And, finally, the controversial term “Stalinism” from textbooks was removed altogether.

But the teachers in the new manuals note the interactivity – now the history of Russia will be told in the scale of the world.

Among the shortcomings of the new textbooks are called quite a high price, about 500 rubles a piece, and a soft cover, in which the book will have to “serve” for five years. Publishers justify themselves that it will lighten schoolbegs. Anna Ershova, a former employee of the Institute for Advanced Training in Education, believes that such textbooks will greatly help teachers. However, the transition to a new standard can cause difficulties.

Anna Ershova, independent expert: “Publishers have reduced the production of textbooks on the federal standard of the first generation. And, of course, for those students who will study history in grades 6-9, a problem arises for them. They will have to purchase second-generation textbooks for the second year and adapt them, choosing the appropriate chronological study period for this or that class. ”

After the story, literature is on the line. The development of a new concept of textbooks there, however, stays on the mandatory reading list. Experts can not agree on whether to include, for example, Saltykov-Shchedrin, and how many contemporary authors should be on the list.

All the textbooks of the new concept will be available in electronic form. Yet, don’t ever expect that soon digital manuals will replace paper. According to sanitary norms, only 12 minutes are allowed in the electronic textbook in the classroom.

The Genetic Legacy of the Mongols

“Here’s a table from a 2007 paper which surveyed groups which include many groups currently resident within the Russian Federation: 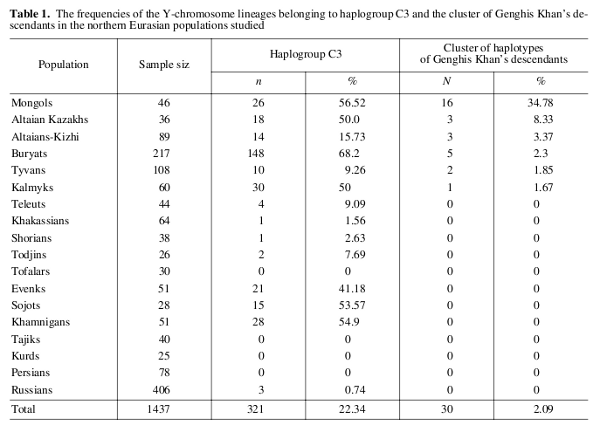 Here is a pollution of blood f Russian people in genetic analysis:

Blue is White Race. Yellow is Asian Race. In Europe section (far left) we see that while native French and Italians are full White, Russians (Russian population on the ex-territory of Mongolian Yoke) is polluted with Asian mix.

Some facts to remind your loved ones thinking that Russia is “free country”:

Internet in Russia appeared only in 1990s:

KGB archives are still not open to public because “they are still relevant”:

Putin wants Russian people to be microchipped as fast as 2025:

Russian people to be microchipped untill 2025