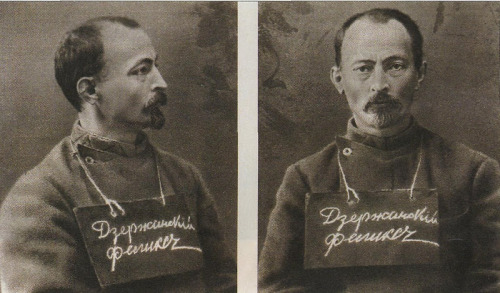 “We stand for organized terror – this should be frankly admitted. Terror is an absolute necessity” – Felix Dzerzhinsky

Felix Dzerzhinsky (1877 – 1926) was a jew and an infamous drug-addict and sadist, known for the mass terror he caused as head of the jewish cheka. Dzerzhinsky was born on the territory of the Republic of Belarus, Dzerzhinsky father was Jewish and his mother was of Polish origin. His family also spoke Polish and Yiddish. Most sources claim Dzerzhinsky and his family were Catholic due to his father falsifying nobility, trying to hide the fact he was jewish. His father’s last name was Rubin (Other variations from different sources include Rutin, Rufin) which is a jewish last name.

Before he became an infamous fiend, Dzerzhinsky was considering becoming a Jesuit priest. He later began to take to marxist ideology and joined a Marxist group, the Union of Workers (Socjaldemokracja Królestwa Polskiego “SDKP”), in 1895. Dzerzhinsky became fluent in four languages: Polish, Russian, Yiddish, and Latin. Dzerzhinsky had worked in a book-binding factory, where he set up an illegal press. Dzerzhinsky was also a follower of Rosa Luxemburg (jew).

Dzerzhinsky organized a shoemaker’s strike, where he was arrested for “criminal agitation among the Kaunas workers” and the police files from this time state that: “Felix Dzerzhinsky, considering his views, convictions and personal character, will be very dangerous in the future, capable of any crime.”

Dzerzhinsky subsequently became one of the founders of Social Democracy of the Kingdom of Poland and Lithuania (SDKPiL) in 1899. In February of 1900, he was arrested again and served his time at first in the Alexander Citadel in Warsaw and later at the Siedlce prison.

In 1902, Dzerzhinsky was sent deep into Siberia for the next five years in a remote town of Vilyuysk, while en route being temporarily held at the Alexandrovsk Transitional Prison near Irkutsk. To the place of exile he escaped on a boat and later emigrated out of the country.

He then traveled to Berlin where at the SDKPiL conference Dzerzhinsky was elected a secretary of its party committee abroad (KZ) and met with several prominent leaders of the Polish Social Democratic movement Rosa Luxemburg (jew) and Leo Jogiches (jew).

Dzerzhinsky was a Soviet statesman and was a member of several revolutionary committees such as the Polish Revkom, as well as several Russian and Soviet official positions.
• Revkom, was a revolutionary committee created under the patronage of Soviet Russia with the goal to establish a Polish Soviet Socialist Republic.

Dzerzhinsky and other jews gained control of the party organization through the creation of a committee called the Komitet Zagraniczny or KZ. As secretary of the KZ, Dzerzhinsky was able to dominate the SDKPiL. In Berlin, he organized publishing of “Czerwony Sztandar” and transportation of illegal literature from Kraków to the Congress of Poland.

Later Dzerzhinsky went to Switzerland where his fiancée Julia Goldman (jew) was undergoing treatment for tuberculosis. She died on June 4, 1904, his father also died of tuberculosis. After a failed revolution, Dzerzhinsky was again jailed in July of 1905, this time by the Okhrana. In October, he was released on amnesty.

As a delegate to the 4th Congress of the Russian Social Democratic Labour Party, Dzerzhinsky entered the central body of the party. From July through September 1906, he stayed in Saint Petersburg and then returned to Warsaw where he was arrested again in December of the same year.

Dzerzhinsky remained to direct the Social Democratic Party, while considering his continued freedom “only a game of the Okhrana”. The Okhrana, however, was not playing a game; Dzerzhinsky simply like most jews, was a liar and was extremely difficult to find.The police however were unable to arrest Dzerzhinsky until the end of 1912, when they found the apartment where he lived, by the name of Władysław Ptasiński. Dzerzhinsky would spend the next four and one-half years in tsarist prisons.

Felix Dzerzhinsky was freed from Butyrka after the February Revolution of 1917. Soon after his release, Dzerzhinsky’s goal was to organize Polish refugees in Russia and then go back to Poland and fight for the revolution there.

April he entered the Moscow Committee of the Bolsheviks and soon thereafter was elected to the Executive Committee of the Moscow Soviet. Dzerzhinsky endorsed Lenin’s April Theses—demanding uncompromising opposition to the Russian Provisional Government, the transfer of all political authority to the Soviets, and the immediate withdrawal of Russia from the war. Ironically, Dzerzhinsky’s brother, Stanislaw, was murdered on the Dzerzhinsky estate by deserting Russian soldiers that same year.

Dzerzhinsky was elected to the Bolshevik Central Committee at the Sixth Party Congress in late July. He then moved from Moscow to Petrograd to begin his new responsibilities. In Petrograd, Dzerzhinsky participated in the crucial session of the Central Committee in October and he strongly endorsed Lenin’s demands for the immediate preparation of a rebellion, after which Felix Dzerzhinsky had an active role with the Military Revolutionary Committee during the October Revolution. With the acquisition of power by the Bolsheviks, Dzerzhinsky eagerly assumed responsibility for making security arrangements at the Smolny Institute where the Bolsheviks had their headquarters.

Lenin(jew) regarded Felix Dzerzhinsky as a revolutionary hero and appointed him to organize a force to combat internal threats. On December 20, 1917, the Council of People’s Commissars officially established the All-Russia Extraordinary Commission to Combat Counter-revolution and Sabotage, known as the Cheka. The word “Cheka” is not only an acronym in Russian for “Special Commission for Fighting Counter-Revolution,” but also is a Yiddish expression for animal slaughter.

Dzerzhinsky oversaw the “first camp of the Gulag,” the Solovetsky. Where, according to Anne Applebaum’s Gulag: A History, “the Cheka learned how to use slave labor for profit.” Records show how brutal, and corrupt Dzerzhinsky’s Cheka was. Stalin had said, “He[Dzerzhinsky] didn’t shirk from dirty work.”

As the Russian Civil War expanded, Dzerzhinsky also began organizing internal security troops to enforce the Cheka’s authority. Tens of thousands of political opponents were shot without trial in the basements of prisons and in public places. Dzerzhinsky said: “We represent in ourselves organized terror—this must be said very clearly.” and “the terrorization, arrests and extermination of enemies of the revolution on the basis of their class affiliation or of their pre-revolutionary roles.”

The Cheka rounded up all those who were under suspicion of not supporting the Jewish Bolshevik government; including Civil or military servicemen suspected of working for Imperial Russia; families of officers-volunteers (including children); all clergy; workers, peasants and any other person whose private property was valued at over 10,000 rubles. The Cheka practiced torture and methods included being skinned alive, scalped, “crowned” with barbed wire, impaled, crucified, hanged, stoned to death, tied to planks and pushed slowly into furnaces or tanks of boiling water, or rolled around naked in internally nail-studded barrels. Women and children were also victims of Cheka terror. Women would sometimes be tortured and raped before being shot. Children between the ages of 8 and 13 were imprisoned and executed. Cheka was actively and openly utilizing kidnapping methods and with it was able to extinguish numerous people especially among the rural population. Villages were also bombarded to complete annihilation.

When ordered to their work they were told: “You are digging your own grave. You must be happy that tomorrow your own kind will be picking up the pieces of your cadavers.” People had their eyes gouged out, their tongues severed, and their ears sliced off. People were also buried alive.

The German Army discovered a chamber full of torture devices, including a testicle-cracker, in an underground chamber in Ukraine in 1941. Adapted dentist drills were used to drill deep into the brain. The cheka sawed off the top of people’s skulls and forced others to eat their brains. The Jews were free to indulge their most fervent fantasies of mass murder of helpless victims. Gentiles were dragged from their beds, tortured and killed.

Some were actually sliced to pieces, bit by bit, while others were branded with hot irons, their eyes poked out to induce unbearable pain. Others were placed in boxes with only their heads, hands and legs sticking out. Then hungry rats were placed in the boxes to gnaw upon their bodies. Some were nailed to the ceiling by their fingers or by their feet, and left hanging until they died of exhaustion.

“The whole cement floor of the execution hall of the Jewish Cheka of Kiev was flooded with blood; it formed a level of several inches. It was a horrible mixture of blood, brains and pieces of skull. All the walls was bespattered with blood. Pieces of brains and of scalps were sticking to them. A gutter of 25 centimeters wide by 25 centimeters deep and about 10 meters long was along its length full to the top with blood.

The Jewish Communist Chekists took pleasure in brutally torturing their victims and “The more one studies the revolution the more one is convinced that Bolshevism is a Jewish movement which can be explained by the special conditions in which the Jewish people were placed in Russia.”

Here follows a list of jewish members of the leadership of the Cheka when the mass terror began in 1918:

In 1922, at the end of the Civil War, the Cheka was renamed as the GPU (State Political Directorate), a section of the NKVD. This did not diminish Dzerzhinsky’s power; he was Minister of the Interior, director of the Cheka/GPU/OGPU, Minister for Communications, and director of the Vesenkha (Supreme Council of National Economy) 1921–24.

Dzerzhinsky died suddenly under mysterious circumstances on July, 20 1926, but the official report says he died of a heart attack . Before his death, Dzerzhinsky began to express his desire to have as much power as Stalin(jew). Stalin was interested in “inheriting” the money Dzerzhinsky had put into foreign bank accounts. Upon hearing of his death, Joseph Stalin(jew) eulogized Dzerzhinsky as “…a devout knight of the proletariat.” [My note, Two faced murdering jews]

Dzerzhinsky name and image were used widely throughout the KGB and the Soviet Union and other socialist countries: there were six towns named after him. He was nicknamed Iron Felix but this can also refer to a 15-ton iron monument of Dzerzhinsky, which once dominated the Lubyanka Square in Moscow, near the KGB headquarters. Mass murderer, terrorist, and jewish beast Felix Dzerzhinsky has been made out to be a hero…

In 2005, the Government of Belarus rebuilt the manor house of Dzerzhinovo, where Dzerzhinsky was born, and established a museum. In 1943, the manor had been destroyed and family members (including Dzerzhinsky’s brother Kazimierz) were killed.

Also President Vladimir Putin(jew) signed a decree restoring the title “Dzerzhinsky Division” to an elite police unit that was previously named after communist mass murderer, Felix Dzerzhinsky. The Dzerzhinsky Division ensured security at the Potsdam Conference of 1945 and the 1980 Moscow Summer Olympics. – http://www.themoscowtimes.com/news/article/putin-renames-police-unit-after-bloody-secret-police-founder/507588.html

Jewish poet/author Heinrich Heine wrote, “The deeds of the Jews are as little known to the world as their true nature.” Very true statement, until now. We are beginning to scratch the surface of the jewish crimes committed against humanity. Many truths will come out in the age of Satan, and people will see the vile truth about the jews. Everyone should do their own research and try and reach as many people as possible (Anti Tracks, Online Warfare etc..). The reverse torah rituals are very important, they are making quite an impact. A lot of information, especially about jewish crimes and or communist crimes, are withheld from the public and from historians. They CAN’T
hide their crimes forever!

Resources*
The Black Book of Communism
http://holodomorinfo.com/glossery/jewish-bolshevik-murderers/felix-dzerzhinsky/
https://en.wikipedia.org/wiki/Felix_Dzerzhinsky
Through the labyrinth of Murder
http://www.worldaffairsjournal.org/blog/alan-johnson/rehabilitation-felix-dzerzhinsky
The Real Holocaust: The Jewish Murder Machine Called The USSR