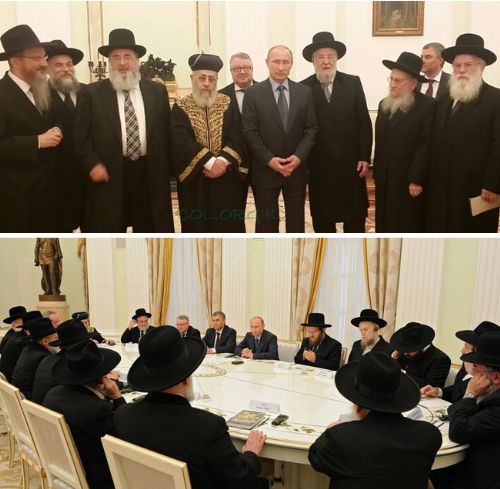 http://www.chabad.org/news/article_cdo/aid/1119/404/1/jewish/Chanukah-Journal.htm
“Mr. Putin said he was familiar with both the menorah and the Chanukah holiday, because as a child his family shared their communal apartment with a Jewish family. He fondly recalled the pleasant demeanor of the various family members, as well as their attempts to preserve their traditions despite Communist reprisals for practicing religion. The Prime Minister recalled that he often saw the father of the house poring over large Talmudic tomes.”

President Putin states:
“I support Israel’s battle that is intended to keep its citizens protected,” he said about the Israel Defense Forces’ operation to restore quiet to the region and stop Hamas terrorism.

This is what Putin supports by his own statements:
Killing Palestinian Children and New Born Babies: Rafah Maternity Hospital Bombed by Israel with Utmost Accuracy
http://www.globalresearch.ca/killing-palestinian-children-and-new-born-babies-rafah-maternity-hospital-bombed-by-israel-with-utmost-accuracy/5394667

“I am closely tracking what is happening in Israel,” Russian President Vladimir Putin remarked in a meeting on Wednesday with a delegation of Chief Rabbis and representatives of the Rabbinical Center of Europe.

The purpose of the meeting, according to the Kremlin, was to discuss joint efforts to prevent the rewriting of history, the fight against neo-Nazism and neo-fascism, xenophobia and anti-Semitism.

“It is important to discuss the subject of the Holocaust of the World War II era. There are Holocaust survivors among the rabbis, they have their personal, dramatic stories,” Rabbi Alexander Boroda, President of the Federation of Jewish Communities of Russia, told Interfax-Religion.

At one point during the meeting, Rabbi Yosef commented that “hours before I flew here, a rocket landed near my house in Jerusalem, the capital of the Jewish nation.”

“It goes without saying there is great anxiety among my children and grandchildren who were forced to enter bomb shelters, for no fault of their own,” he said, adding that it is “hard to describe the emotional damage that is being done to them. All this is just for the crime that they were born to the Jewish nation.”

The Chief Rabbi concluded by asking the president to use his power “to bring a stop to the violence. There cannot be a situation where people use religion to slaughter the innocent.”

Most of the Israeli population is currently living under the threat of rocket fire. Life between sirens, in and out of bomb shelters, has become the daily reality for millions of Israelis.

Hamas terrorists in Gaza have fired more than 200 rockets at Israel since Operation Protective Edge began on Monday, July 7 – and over 650 rockets since the beginning of 2014.

According a news report, Putin replied by asking Rabbi Yosef to pass along a message to Israel’s Prime Minister Benjamin Netanyahu that Russia is a true friend of Israel and of the Prime Minister.

“I support Israel’s battle that is intended to keep its citizens protected,” he said about the Israel Defense Forces’ operation to restore quiet to the region and stop Hamas terrorism.

“I also heard about the shocking murder of the three teenagers,” Putin added about the kidnapping and murder of Naftali Fraenkel, Eyal Yifrach and Gilad Shaar, three Yeshiva students in Israel. “This is an unconscionable act and I ask that you bring my condolences to the families.”