Let us remember Jewish Communism was created by the Rabbinical class of the Jews. Their leadership. This includes the Rothschild’s.

What is Putin’s openly stated aim:

Is the main culprit Putin himself, who determined that the disintegration of the Soviet Union is the greatest geopolitical catastrophe of the 20th century; who admires Stalin and reinstated the Soviet national anthem with different lyrics; the same Putin who, in the VOLDAI conference in September 2013, said that: The integration of the former Soviet Union into a single geopolitical entity is a key priority for Russia.

Putin and the Jews behind him want to rebuild the Soviet Union.

Let us not forget those Jews in the White House, the British government and elsewhere that worked together for a World Communist Jewish Government and still are:

Why is the underling of the Communist creators Rothschild’s, Abramovich [who put Putin into Power] arm and arm with the Rabbinical class in Russia? Secular jooz, Communist joo’s and religious Jews working together…..Because their all Jewish of course. Rothschild’s are part of the Cohen [Rabbinical class] that is the leadership of Jewry.. Waitz a secondz they are all supposed to be against each other right? And their all working to bring back Communist rule in Russia. Why is Putin making homage to the Jewish state ruled by the Rothschild’s and established by the Soviet Union? To pray at the holiest spot of Judaism? Why is Putin connected so closely to Chabad-Lubavitch an orthodox Jewish movement. Who follow the Talmud and Torah. Why is Putin’s father a Talmudic scholar? But Putin is a open Communist? And held a high position in the KGB under the Soviet Union.

Because Goyim, the Jews are working together to create a World Jewish Government. You might know this as Communism but the Jews know better. Their racial nature is their religion.

As Jew Otto Weininger stated: “The Jew is an inborn Communist.” Because Communism is the Jewish soul, its simply Judaism under a politically dishonest mask.

Why did Jewish Rabbi’s create Communism……Hess and Marx where both Rabbi’s. And the Rothschild’s who funded them and exported Communism around the world are of the Rabbi class as well:

“Communism is just another system of Jewish control, a scam for Jewish hegemony. Who could doubt it when it’s two principal architects were Jews of Rabbinic descent — Moses Hess and Karl Marx. Hess converted both Marx and Engels to Communism. Marx referred to Hess as the “Red Rabbi.” In 1935 Rabbi Stephen Wise stated “Some call it Marxism, I call it Judaism.”

Why do Jews say Anti-Communism is anti-Semitism?

Obviously because as the Jews stated Communism is the New Name for Judaism.

Why where the laws of the Talmud/Torah enacted on Communism Russia where any criticism of the Chosen People is the death penalty.

In 1931 Soviet Dictator Josef Stalin [my note also a Jew and married to a Jewish wife] told the Jewish News Agency in the United States that:

Because its a Jewish Government so criticizing the Jews is illegal.

What this whole Zionist issue with the Jews comes down to is the Jews believe they have a messiah who in their holy writings like Isaiah is a Political leader and also a political movement. This King of the Jews must rule from Israel and when they conqueror and destroy all the Goyim nations and destroy their gods, races and, nations, cultures and Judaize them. Their god will descend to mount Hebron and rule thought the Messiah in Israel and totally destroy all the races and nations finishing them into a Jewish world. This is meaning of the Jewish religion and the instructions for this is in their Torah.

The Rothschild’s believe this is them, they own and created Israel and have been pushing this Messianic agenda which others Jews have done for centuries before the Rothschild’s. So its obvious why the Rothschild’s created Communism its the Messianic political movement they are given instructions in the their Torah to create, for Jews to conqueror the planet totally with. And Rothschild’s will rule as the Messianic Jewish Kings from Israel thus fulfilling the Messianic mission of Judaism. By actualizing it into reality.

When this happens the Jewish world will be united under their Messiah to rule the Goyim with a Rod of Iron as their holy texts state. The program to do this is dissolution of all races, cultures, nations, individual economies and ethnicities. This will be replaced by a One World Religion of Judaism. The “No God But God” the Muslim’s state. They got this off Judaism this means no God but the Jewish God thus the Jews themselves. The Messianic Jewish Religion they have planned to rule the Global Zion by is Communism. Its a religious Jewish Messianic movement which has been written on by the Jews themselves as being such. Remember the Messiah is also a Political Movement.

So that is why all these Jews who are supposed to be opposed to each other are actually working together at the top to create their “God World” where the Jews become God.

The Torah is the blueprint of the Jewish agenda for creating a World Jewish Dictatorship. Communism is simply a pseudo political mask for this. As the Jews admit.

As we where told outright by the Jew, Maurice Samuel in his book: ‘You Gentiles’

“We Jews, we, the destroyers, will remain the destroyers for ever. Nothing that you do will meet our needs and demands. We will for ever destroy because we need a world of our own, a God-world [Jewish World Order]”…. As Samuel tells us right to our faces what a “God World” is.

“We [Jews] have a national God. In the heart of any pious Jew, God is a Jew.” That’s right from their Torah their most Holy “God” Book.

Take special note Goyim they are talking about you here:

Deuteronomy 16:
And thou shalt consume all the people which the LORD thy God shall deliver thee; thine eye shall have no pity upon them: neither shalt thou serve their gods; for that will be a snare unto thee.

2 And when the LORD thy God shall deliver them [Goyim] before thee; thou shalt smite them, and utterly destroy them; thou shalt make no covenant with them, nor shew mercy unto them:

22 And the LORD thy God will put out those nations [my note Nation means Goyim] before thee by little and little: thou mayest not consume them at once, lest the beasts of the field increase upon thee.

23 But the LORD thy God shall deliver them unto thee, and shall destroy them with a mighty destruction, until they be destroyed. 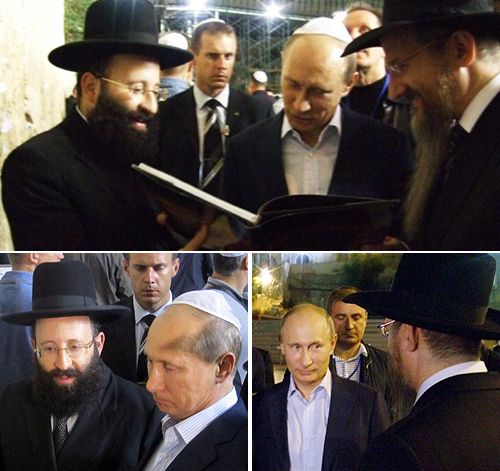 Putin’s visit to worship at the Wailing Wall.
http://www.collive.com/show_news.rtx?id=20655

The powerful Russian President Vladimir Putin’s visit at the Kotel took an impromptu turn when a frum Jew called to him.

Russian President Vladimir Putin paid a visit to the Kotel in Jerusalem Tuesday night with an entourage of Israeli and Russian security personnel.

Originally scheduled for the afternoon, the visit was postponed to 2:00 AM due to security considerations.

He was accompanied by Russia’s Chief Rabbi Berel Lazar and his colleague Rabbi Alexander Barada of the Federation of Jewish Communities of Russia. They were greeted by Kotel Rabbi Shmuel Rabinowitz.

At the Western Wall, the President offered a prayer and recited Tehillim from a Russian-Hebrew prayer book.

Despite the late hour, bystanders were still around and one of them called out in Russian, “Welcome President Putin.” He got a smile in response.

Later, after visiting the Kotel tunnels, Putin broke away from his security circle and approached the man who had called out to him.

Leaning over the police barricade, the former KGB officer began to chat with the frum Jewish man who apparently is an immigrant from the former Soviet Union.

The man related the importance of the Kotel to the Jewish nation, and mentioned the Beis Hamikdash and Shlomo Hamelech who first built it.

“That’s exactly the reason I came here – to pray for the Temple to be built again,” Putin responded, according to a report on the Bechadrei Chareidim website.

“I wish you that your prayers will be received,” the president added and warmly shook the man’s hand.

A person who witnessed the 3 minute conversation, commented “I guess (Putin) is not as closed and tough as we
thought.”

Putin will save “us” says Jew Kapner! By “us” he means Jews.

“Mr. Putin said he was familiar with both the menorah and the Chanukah holiday, because as a child his family shared their communal apartment with a Jewish family. He fondly recalled the pleasant demeanor of the various family members, as well as their attempts to preserve their traditions despite Communist reprisals for practicing religion. The Prime Minister recalled that he often saw the father of the house poring over large Talmudic tomes.”