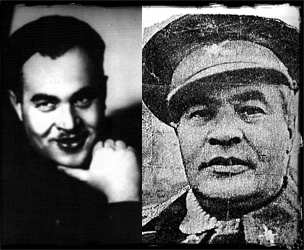 Manfred Stern (1896–1954) also known by several other names; Emilio Kléber, Lazar Stern, Moishe Stern, Mark Zilbert, was born into a Jewish family in a province in the Austro-Hungarian Empire on the border between Romania and Ukraine. Manfred studied medicine at the University of Vienna. Stern was also a military advisor in China, and gained fame under his nom de guerre or “war name” as General Kléber, leader of the International Brigade during the Spanish Civil War.

Manfred was drafted into the Austro-Hungarian army at the beginning of World War I, where he was captured by the Tsarist army and taken to a prisoner of war camp in Siberia. He was freed by the communist October Revolution (Communists jews inciting terror and violence to try and take control), where he became a Bolshevik and joined the Red Army.

Manfred returned to Moscow and enrolled in the Frunze Military Academy. Upon graduation, in 1924, he joined Walter Krivitsky real name Samuel Ginsberg(jew) in the Red Army’s Fourth Department (the GRU, or military intelligence).

Manfred Stern was a member of the GRU, which was Soviet military intelligence. The official full name was Main Intelligence Directorate of the General Staff of the Armed Forces of the Russian Federation. The GRU was created on October 21, 1918 under the sponsorship of Leon Trotsky(jew). The GRU was tasked of handling all military intelligence, particularly the collection of intelligence of military or political significance from sources outside the Soviet Union, otherwise known as spying. The GRU also had a number of military advisers who could be sent to friendly parties whenever necessary.

Vladimir Lenin(jew) saw the opportunity to ferment a communist revolution in Germany. He ordered Gregory Zinoviev(jew) to organize an uprising. Some senior figures, including Karl Radek(jew), Nickolai Bukharin(jew) and Yuri Piatakov hurried to Germany to get military units in strategic locations ready for a nationwide revolt, which would be launched at the command of Moscow. Zinoviev proposed an uprising in Hamburg, Manfred was lent to the KPD M-Apparat for the Hamburg uprising in 1923. . Communists in the city, believing themselves backed by a national uprising, took to the streets, attacked the police station, they also attacked any other group they deemed as socio traitors or socio fascists, and occupied major facilities. However, they did not receive support from other working-class groups and the rebellion was crushed in three days.

Violence played a fundamental role in every communist practice and party. Many of these underground military organizations were run by rotten characters (jews). When French forces occupied the Ruhr Valley, Stern and six other officers were sent to the area to encourage resistance. This involved working with the German Communist Party. They created “small units of men whose function was to shatter the morale of the Reichswehr and the police.” Krivitsky(jew) was involved in forming assassination units who “struck swiftly and effectively in various parts of Germany, picking off police officers and other enemies of the Communist cause.”

In 1929 Stern served as a spy in the United States for Joseph Stalin(jew), becoming the GRU’s chief spy in the United States. Based out of New York City and operating under the cover name of Mark Zilbert, Stern managed a network of sources and agents involved in the theft of military secrets. In one operation they stole the plans for a new American tank.

In 1932 handed off his position to aleksander ulyanovsky(jew) and traveled to Shanghai where he served as the Comintern’s military advisor to the newly created Jiangxi Soviet. Stern’s activities in China remain veiled in mystery. In a report to the Moscow Comintern, he claimed that he tried to forge an alliance between the Chinese Red Army and a rebel Nationalist army. However, this alliance failed and the National Revolutionary Army, under the command of Chiang Kai-shek, encircled the Chinese Red Army, forcing them to abandon their base in Jiangxi. Manfred Stern was also the Soviet representative to Mao’s Chinese Communist forces, contributing to the chinese revolution aka genocide.

Stern returned to Moscow in 1935 and worked briefly for Otto Kuusinen in the secretariat of the Executive Committee of the Comintern. In September of 1936 Stern arrived in Spain, where he would adopt the name of one of Napoleon’s generals, “Kléber” a name that was easy for the Spaniards to pronounce. He served as a military advisor to the International Brigades against Franco’s rebel army.

• The International Brigades were military units, made up of volunteers from different countries, who travelled to Spain, in order to fight for the Second Spanish Republic, in the Spanish Civil War.

In 1937 he would lead the newly established 45th Division, but the condition of the unit in combat caused Kléber to be replaced by Hans Kahle as leader of the Republican Infantry division. Stern remained in Spain as liaison agent with the Republican Government and still enjoyed military prestige among Spanish Communist Party members.

The NKVD chief in Spain, Alexander Orlov(jew), knew that Stern’s recall meant certain imprisonment and death because in Moscow Joseph Stalin(jew) and Nikolai Yezhov(jew) were busy purging the Red Army. He offered to employ Stern as a member of the NKVD. While awaiting orders, Stern spent his final months in Spain relaxing at a small orange plantation and entertaining his young Spanish mistress. Kliment Voroshilov denied his transfer and ordered his return to Moscow. It was decided by Joseph Stalin that the Comintern “had done its job and its leaders were no longer needed, particularly if they knew too much”. Stalin feared that NKVD agents were supporters of Leon Trotsky. (Stalin had severe paranoia and didn’t want to lose power) Stern was recalled to Moscow, and by the summer of 1937 over forty intelligence agents serving abroad were summoned back to the Soviet Union.

In May 1939 a Military Collegium condemned Stern to fifteen years of hard labor. His name was deliberately withheld from official Soviet historians of the Spanish Civil War. It is now known that he was not shot at the time, but arrested, beaten on the legs with steel rods and sent to a Gulag. Where the remaining years of his life were spent, and he died of exhaustion at a labor camp in Sosnovka on February 18, 1954.