—Vladimir Putin in the foreground, Roman Abramovich in the background.

Abramovich is chairman of the Federation of Jewish Organizations in Russia (who are allied with the Putin administration) and he also donates money to the Jewish Chabad-Lubavitch movement. Chabad-Lubavitch is an orthodox Jewish movement. 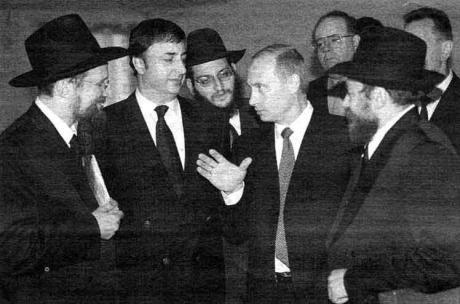 —Chabad-Lubavitch is an orthodox Jewish movement.

Abramovich was the first person who recommended Boris Yeltsin to choose Putin as his successor. When Putin formed his first cabinet of prime minister in 1999, the Jew Abramovich was the one who first held “personal interviews” with each of the candidates before they were approved. After that, Abramovich remained one of Putin’s closest allies.

In 2007 Putin asked this Jew, who would be elected as the new President – Dmitry Medvedev was then personally recommended by Abramovich. At the G-20 meeting in London in 2009 and the G-8 meeting in 2010, it was Medvedev who became renowned as he had with him a sample of the new supranational world currency “United Future World Currency”, which he campaigned strongly for according to Bloomberg.com.

Chris Hutchins , who has written the biographies Abramovich: The Billionaire from Nowhere and Putin A Biography, describes Putin’s relationship with Abramovich like one “between a father and his favorite son”.

Under the heading “prominent Russians”, Roman Abramovich is highlighted in Russia Today’s encyclopedia “Russiapedia”. It says, among other things, that Abramovich had access to Jeltzins “innermost circle” through the Jewish oligarch Boris Berezovsky.

The Jewish Rothschild’s who created the Soviet Union at the top. Still own Russia, who Abramovich is a front Jew of:

Russian gov. owned Rosneft in business with Rockefeller[my note Rockefeller’s are Jewish they are of the Rothschild bloodlines] run Exxon and BP despite “sanctions.”

The Putin Government and Chubais are joint owners of RUSNANO.

The Rothschild Global Financial Advisory is located in downtown Moscow and their website brags of “high level political access” to the Russian government.

Deripaska is CEO of RUSAL.

Abramovich is Putin’s close confidant, and a joint shareholder along with the Russian government in assets such as Gazprom, Aeroflot, and RUSAL.

The Rothschild family are majority shareholders of Rio Tinto. RUSAL and Rio Tinto are involved in joint mining operations despite so called “sanctions” imposed by the West.

The Rothschild family are majority shareholders of Rio Tinto. RUSAL and Rio Tinto are involved in joint mining operations despite so called “sanctions” imposed by the West.

Nat Rothschild is a fellow RUSAL investor, and best friend of Roman Abramovich. Nat is also close friends, and RUSAL business partners with with Oleg Deripaska.

Remember the Jewish are marching the Goyim towards the Microchip:

The Jewish Forced March To The Microchip

Since 2013 in Russian Federation there will be implemented electronic identification card system (UEK – Uniwiersalnaja Eliektroniczieskaja Karta), the same as RFID. This is officially admitted by administration of Chabarovsk Country.