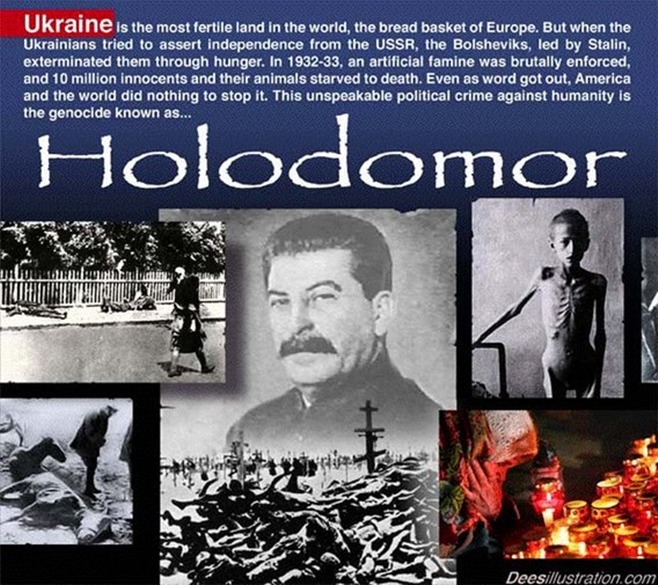 “ To defeat the enemy, only one solution was possible, he would have to be starved out. “ – Jewish solution

How many people have heard the word Holodomor? … Or even know what it means? …
Did anyone hear about the Holodomor while in school? I know you heard about the Holohoax while in school. False atrocities the jews claim and push on the Gentile people, to keep them ignorant to real crimes committed by jews against the Gentile people. The world has turned a blind eye to many jewish atrocities..

The Holodomor was a man-made famine in the Ukrainian Soviet Socialist Republic in 1932 and 1933. Imposed by Stalin’s (jew) regime on Soviet Ukraine and primarily ethnically Ukrainian areas in the Northern Caucasus in 1932-33.

Unlike the famine in 1921 – 1922 where soviet authorities acknowledged and sought help from the international community,the famine in 1932-1933 caused the deaths of over 6 million people, and the soviet regime tried to deny it. Anyone who tried to bring attention to it were silenced by soviet propaganda. The great famine for a long time was only known through small circulation pamphlets published by ukrainian organizations and were not widely comprehended until the latter half of 1980’s. Novels of the Ukraine famine were censored and anyone who tried to talk about it were subject to arrest.

Edouard Herriot, the french senator made a statement “I have crossed the whole of ukraine, and I can assure you that the entire country is like a garden in full bloom.” Such blindness was politically motivated, for French leaders not to jeopardize soviet union minds regarding Germany, which became a threat with Adolf Hitler’s rise to power. (Because Hitler wanted to free the Gentile peoples under jewish control)

Collectivization and enforced settlement programs had totally destabilized the traditional nomadic economy. Collective farming defined as (especially in the Soviet Union) a farm, or a number of farms organized as a unit, worked by a community under the supervision of the state. Essentially you work your ass off and the state takes everything from you. The peasants were left with nothing… Extermination by hunger because the Jews hate farmers…. they hate life…

“Through starvation and brutal work they were deprived of life“

People feared what they deemed the Ear law. People condemned under it had done nothing but take a few ears of corn or rye from the fields, and some people received the death penalty because of it.

They were not allowed to leave, no one was allowed in, they were trapped with no food. The
GPU was to ban the departure of the peasants from Ukraine and the Northern Caucasus area because it was a ploy against collectivization in particular and the soviet government in General. Railway tickets were suspended and barricades were put up. Children are brought into near cities in hopes someone will take care of them and the parents returned to their village to die. But streets were patrolled by Dvorniki, they collected the children (and any peasants they find trying to flee from starvation ) and took them to the police station. A medical team does a sort of selection process, anyone who has yet to swell up are directed to kholodnaya gora buildings, where most of the population lie dying on straw beds. People who are already starting to swell up are moved out about 40 miles and abandoned so they can die out of sight.

They did not only face hunger but typhus as well. Typhus defined as an infectious disease caused by rickettsiae, characterized by a purple rash, headaches, fever, and usually delirium, and historically a cause of high mortality during wars and famines.

Some bodies were found with their livers removed, through a slit in the abdomen. Police had picked up some of these amputators and they had admitted to using human liver as a filling for meat pies they were selling in the market.

Farmers were tortured and forced to give up all their remaining supplies. Some farmers tried to bury some grain, because the state had taken everything and left them with nothing. But certains methods were deployed to get the hidden grain from the starving farmers.
The cold method: The worker is stripped bare and left out in the cold, stark naked in a hangar.

The hot method: The feet and the bottom of the skirt of female workers are doused with gasoline and then set on fire. The flames are put out and the process is repeated.

Death was seen everywhere, people turned to cannibalism. Many deaths were unrecorded and, extortion became a daily practice, children were abandoned, cannibalism was widespread, banditry ran rampant, and peasants were forced to face a new form of slavery.

Sholokhov sent a letter to Joseph Stalin, so that he would send “real communists” who would not abuse their power, and to stop the torture of the farmers to collect grain.

Part of the letter Stalin wrote in response, “The workers in your district, not just in your district, but in many distracts went on strike, carried out acts of sabotage, and were prepared to leave workers from the red army without bread! The fact that this sabotage was silent and appeared to be quite peaceful. There was no blood shed. (LIE) Changes nothing these people deliberately tried to undermine the soviet state. It is a fight to the death, Comrade Sholokhov! Of course this cannot justify all the abuses carried out by our staff, the guilty few will be forced to answer for their actions. But it is clear as day that our respected workers are far from being the innocent lambs that one might imagine from reading your letters. ”

Once again you can see while under jewish/communist you rule, you mean nothing to the state and are nothing. You are brutally worked and then have everything taken from you. Starvation is one tool used by the jews, as you can see not just from the great famine in Ukraine, but in other instances where jewish communist rule was in place. These incidents are not just terrible things that happened in the past, but things that will happen again if people don’t wake up to the problem, the jewish problem…

The Holodomor genocide famine in Ukraine between 1932-33 forced millions to starve to death. The mass food confiscation project planned by the central Communist regime aimed to strangle the resistance of Ukrainians to the ruling leadership.

Despite large grain reserves, the hunger-stricken population was punished by execution during the mass collectivisation, even if as little as a handful of grain was collected.